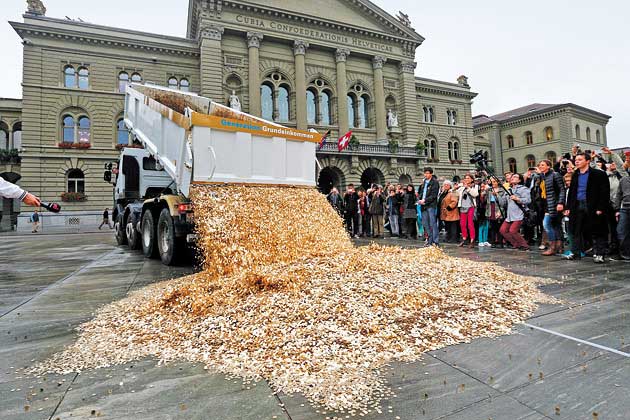 The Swiss Join the Fight Against Inequality

“Generation Basic Income’s proposal represents a quantum leap. For starters, 2,500 Swiss francs per month is a substantial sum. Also, unlike with welfare programs, beneficiaries wouldn’t be required to document that they are unable to work. That the payments might discourage recipients from looking for a job isn’t a drawback in the eyes of proponents; it’s the whole point. “If unemployment goes up, that’s a great thing,” says Daniel Straub, the coordinator of the referendum effort and author of The Liberation of Switzerland. “Because we should see unemployment as freeing people up to pursue what creates meaning for them.” Adds Enno Schmidt, a painter and documentary film producer who’s campaigned for the idea since 2006: “It’s not societally very efficient if people are forced to do something that they don’t really want to do.”

The referendum’s organizers have left the details purposefully vague. If it passes, the right to a minimum income will be written into Switzerland’s constitution, but it will be up to Parliament to decide how to implement it. Providing each citizen with the proposed salary would require a massive amount of money—some $220 billion a year, or roughly a third of Switzerland’s gross domestic product. According to Straub, about $75 billion of that would substitute existing social programs: unemployment insurance, disability payment, pensions, and welfare. Much of the rest would be recouped by cuts in salaries, because the payments would replace part of existing paychecks. The remaining gap could be bridged, he says, with a consumption tax, an estate tax, or tariffs on carbon emissions.

Less clear is what impact all of this would have on Switzerland’s labor market. The proposed salary falls far below Switzerland’s average annual income, so the bulk of the middle class would presumably choose to continue working. Low-paying, low-status jobs such as garbage collection, however, would likely become increasingly expensive to fill. “It makes sense if we pay more for the work that we don’t want to do ourselves,” Wili says, “and less for the work that people like to do.”

The initiative’s proponents cheerfully admit they have a struggle ahead of them. “If we were to hold the vote this Sunday, it would fail terribly,” Straub admits. “But we have two or three years to make our case.” In the meantime, Wili and her comrades have listed the vault and its contents on jamesedition.com, an online marketplace for luxury products, where it’s been the most viewed post for the past two months, attracting interest from as far away as Dubai, Moscow, and Houston. As Wili scales the pile of coins, she offers what might be history’s softest sell. “You realize pretty fast it’s not as cool as it looks,” she says. “The coins are cold. They’re hard. They’re dirty. They smell bad.”